We took our children (to include our 20-year-old son and his adorable girlfriend) to the Tallahassee Museum of Florida History. After visiting the museum, we went to the gift shop. There, in the middle, was a display with the cutest little animals – fish, dolphins, eagles, flamingos (of course), etc… We bought one of each. Our fight to Free the Egg didn’t enter my mind until the cashier put the little creatures into their bag. The bag had, on the back, a written warning of “not for under the age of three” and, wouldn’t you know it, the SAME IMAGE as on the Kinder Egg box and egg! Time to blog. I present one of the little creatures, a fish, next to a Kinder Egg capsule. One is legal, one is not:

Guess which is touted as being a choking hazard to children? 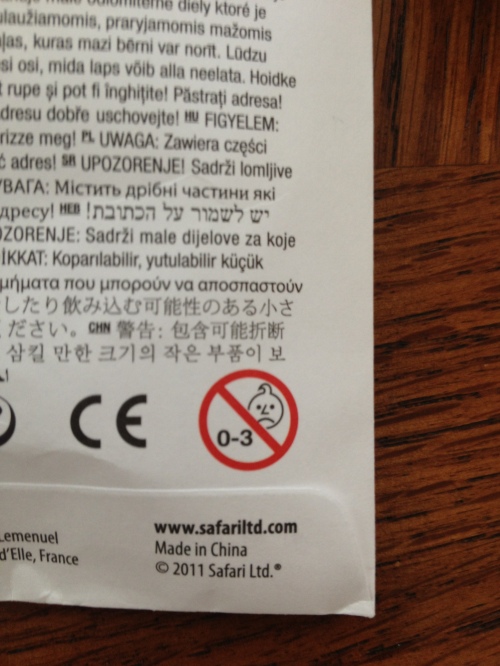 Back of the bag for the small animals.

Because of the recent news article I posted (see the last blog) clears up who is behind the ban being enforced  (thanks a lot, Mars.  Jerks.),  I know that pointing out the stupidity of the ban based on the size/safety/warning label is moot (eat your heart out, Rick Springfield).  However, unless we get some sort of donation of, oh, I don’t know, a few million dollars, this is all we can do.  We do have a new campaign in the works to bring more awareness.  I hope to have that up and running by the end of July.  In the meantime, keep spreading the word, send in pics/videos of your kids (and adults) enjoying the Egg, and send Mars a nasty gram.  #FreeTheEgg

We usually get quite the boost in numbers/press around Easter. That’s when folks go to stores in search of the Ferrero Kinder Egg. It’s the pinnacle of Easter Eggs…the stuff of little kids’ dreams. Upon discovering that they cannot get the Egg in US stores, they turn to the Internet and many find our site.  However, as a wonderful surprise, we have been included in a fantastic article in the International Business Times. There is information in there we did not know…or know for sure.  We had been told (via a source that wished to remain anonymous) that there was a confectionary company behind the ban.  We now know who that is.  And, because of that information, this household will no longer purchase Mars products.

We at Free The Egg are up against a lot of money.  It never ceases to amaze me that we live in a country where money is so much louder than common sense.  If Mars doesn’t think it can stand up to the Ferrero Kinder Egg or the Nestle Magic, then they must have no faith in their product.  Or maybe this is where “survival of the fittest {tastiet} {coolest}” should kick in.  Read this article – http://www.nytimes.com/1997/09/28/us/giants-in-candy-waging-battle-over-a-tiny-toy.html?pagewanted=all&src=pm  I don’t know about you, but when I read the quotes for those opposed to Nestle Magic (hence the Kinder Egg), I hear whiners.  Big, rich whiners.  And how about the Mars guy lying?  Why would he lie?  Because he was a whiner who didn’t believe his product could outlive Nestle Magic.

This is where I admit I’m discouraged.  Nestle fought Mars.  They fought the stupidity and the whiners.  The whiners won.  We don’t have the resources Nestle has.  We have our voices and we have our passion.  Don’t misunderstand.  I’m not giving up…I’m just a citizen of Realville and, in reality, we’re facing a Goliath that cares about money.  Only money.