Many of you have sent us pictures of the Yowie chocolate.  We’ve never seen one in our local stores, until today.  We decided to buy one so we could give our opinion and (hopefully) find a suitable substitute for our beloved Egg. Let’s get the facts out of the way – 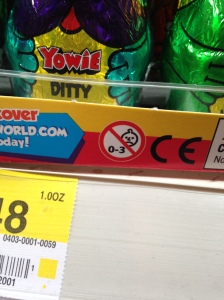 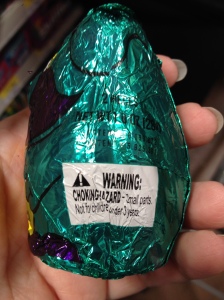 Yowie isn’t an egg.  He’s a, um, uh… thing.  There are six “things” in the Yowie World.  This particular one is “Ditty”.  So – we brought home “Ditty” to go through a three person evaluation.  The evaluators?  Me, my husband, and our 10-year-old daughter.  We took the wrapper off and saw right away why Yowie passes the CPSC test.  You can see the plastic capsule at the seam of the two chocolate halves. Because of that, the halves come apart easily.  The capsule is divided into two halves of two colors. 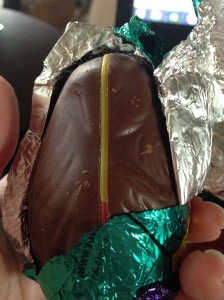 The capsule was not easy to open, until we noticed the “press here”.  Then it was easy.  (Duh) The toy is actually pretty cool.  It was a little plastic wolf.  He’s a little scary looking for me, but our daughter likes it.

So what’s our eval on the chocolate?  I didn’t like it.  It tastes, to me, like the chocolate they use in the little solid Easter chocolate eggs. I’m a chocolate snob and enjoy dark chocolate more than milk chocolate.  (That being said, I LOVE Kinder Chocolate.  Maybe if Yowie added the layer of white chocolate to the interior?)  My husband thought the chocolate was fine and my daughter loved it.  {I don’t know if her taste buds work right.  Her favorite foods are Pringle Pickle Chips, sour cream, chocolate, and macaroni and cheese.  Don’t judge.  We can get her to eat healthy food but it is a battle of the wills, people.  She’s adorable and tiny but soooo strong-willed.}

I’ve always said that if a suitable Kinder Egg substitute came out, we’d spread the word.  Although I didn’t care for the chocolate, it did get some excitement from my kiddo.  We mentioned Yowie in a blog a while back (https://freetheegg.wordpress.com/2014/10/05/ferroro-is-fighting-after-all/).  It sounds like they were trying to get a deal with Ferrero.  I’d be interested in finding out more about their company.  If they came out with better quality chocolate, I’d be thrilled.  So is this a full-on endorsement?  Not really.  It’s a quasi-endorsement.  I’d like to learn more about them, find out what is going on with them and Ferrero, and see if they have any plans on different chocolate.

What about you?  Have you tried them?  What did you think?  What was your toy?  If they did somehow get a deal with Ferrero (go read the other article!) would you be more interested in their product?

Understand that we are not giving up the fight, just keeping our eyes, ears, and tastebuds open to all possibilities.  We still need to Free The Egg.