We were near Tampa last weekend and saw this at a store:

This called for a test of the “legal” competition.  I keep hoping I’ll find a suitable substitute.  ha ha ha ha ha

This afternoon, my 6th grade daughter asked where the chocolate was.  In our home, there is always chocolate, olive oil, and garlic. Always.  Sadly, this egg is representing the chocolate (I’m heading to the store to redeem myself after I post this).  Well, that was a bit of a spoiler on how the test went!

There are four things that make up the pure joy of a Ferrero Kinder Egg:

Let’s see how the Disney Milk Chocolate & Surprise egg did…

Normally, the knock-off Kinder Eggs are legal because you can see the seam of the plastic capsule between the two egg halves.  Would the Disney Egg be the same?  Check it out:

2.  The Seam Test.  Can we break it apart so we can easily share the chocolate? 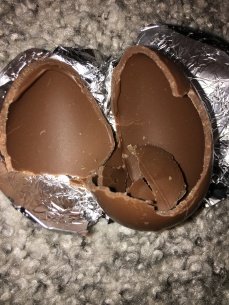 Having the toy separate messes up our testing order.  Normally we wouldn’t have access to the toy until after the Seam Test. 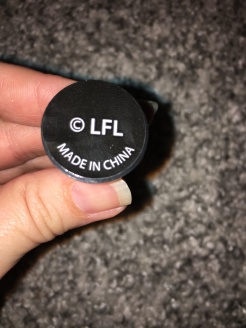 The toy isn’t bad.  It’s a half-Yoda that can sit on a desk or something.  Super exciting?  No.  Totally lame?  No.  It passes.

4.  The Taste Test.  It doesn’t matter how cool the toy is, the chocolate has to be good.

Me – one piece.  Yuck.  That doesn’t even qualify as chocolate, but I’m a chocolate snob.

My daughter – (She who loves all junk food and thinks healthy food is evil)  One piece and then, “This tastes like rubber.”  I’ve never seen her walk away from chocolate.  Ever.

My husband – “It tastes like an Easter Bunny.”  He ate the rest.  ~sigh~  I’ve been trying for over 20 years to convert him to the Chocolate Snob Party.

So, for me, the Kinder Egg Substitute Hunt continues.  I give this egg a D+, only because of the quasi-cool toy and my husband not disliking the taste.

Shopping today and saw this: 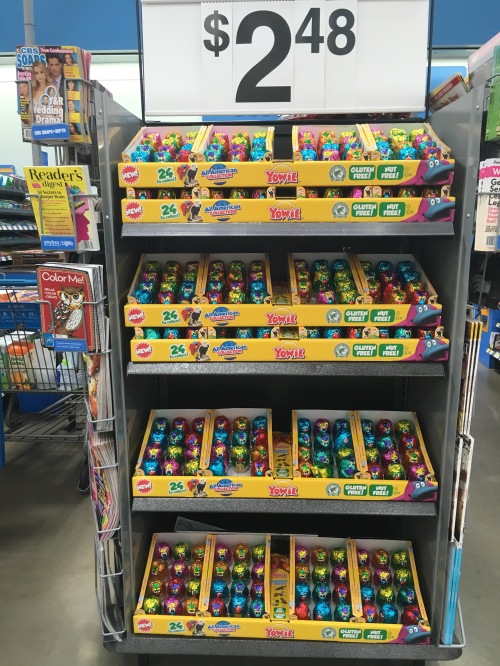 So. Not. Cool. I want my Kinder Eggs.